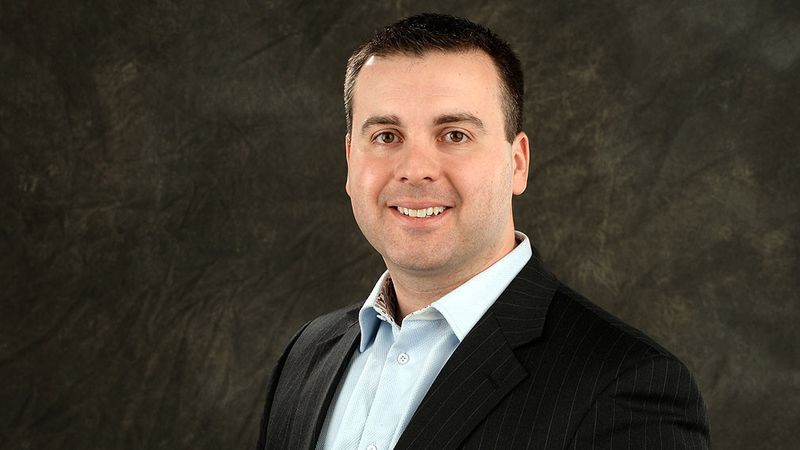 Reporter Jeff Dickerson, a beloved and respected figure on the Chicago sports scene, died Tuesday after a bout with cancer.

The longtime ESPN reporter, who made his name covering the Chicago Bears, had been undergoing treatment at a hospice center in Barrington after being diagnosed with colon cancer earlier this year.

WMVP-AM 1000 personality Marc Silverman, who announced the news Tuesday on “The Waddle & Silvy Show,” called Dickerson “the most optimistic man I’ve ever met in my life.”

Almost three years ago, on Feb. 26, 2019, Dickerson’s wife, Caitlin, died of melanoma at age 36 after battling cancer for eight years. Dickerson took time off from his ESPN duties to care for Caitlin and raise their young son, Parker, during her illness. After Caitlin’s death he hosted a radio telethon to help raise money for cancer research.

“It’s hard to put into words what losing one of my closest friends at this stage of life feels like,” WSCR-AM 670 reporter Zach Zaidman said. “Seems like something that should be a few decades away. I loved him like a brother. He was so determined. I can’t stop thinking of him and his parents and Parker.”

Though Dickerson’s illness was known by his colleagues at the radio station and many in the Bears press box, he did not make it public and still was tweeting information about the Bears as recently as Dec. 3.

“Those who have listened to the radio station are in shock today,” Silverman, a cancer survivor, said on ESPN 1000. “And the reason is Jeff Dickerson is the strongest person I know. People say that and they throw that around about people all the time. I know firsthand.”

The Bears released a statement that called Dickerson “the consummate professional.”

“JD took a great deal of pride in his coverage of the Bears for 20 years,” the statement said. “He was a true professional and even better person. JD always was one of the first media members to arrive in the press box on game day, with a hello and a smile that could brighten anyone’s day. He was one of a kind and will truly be missed.”

San Francisco 49ers kicker Robbie Gould, a friend of Dickerson’s since Gould’s days with the Bears, spoke with him by phone at the hospice Friday.

“Today is a very sad day to lose a close friend, to lose a person I’ve looked up to as a mentor in the media world, especially in the Chicago market,” Gould said. “And especially with what he went through the last 10 years with his wife and his own fight (with cancer) and taking on the single parenting life with his son, my heart aches for him.

“You look for a moment of asking yourself ‘Why?’ or ‘How could this happen to such a great person, husband, friend, father, and mentor to many people?’ He’s one of the strongest people I know.”

Gould said Dickerson “touched many lives” and “people will be able to see the influence and impact he had not only in Chicago, but nationwide.”

“You’re going to see a lot of people come together and they’re going to laugh and shine some of that positive light on each other during a very difficult time,” Gould said. “He was loved and he will be missed.”

Bears players confided in Dickerson, Gould said, because they knew “he wasn’t going to railroad the message for his own personal gain.”

“Every story you saw was one happening in true time and what the true story was,” he said. “That’s what players could always appreciate with Jeff. It was great walking into the locker room and having conversations about football … but also trying to find the positive story to give fans hope and give the players their due justice when things might not have been as great as they could’ve been.

“He was a very well-respected person by all the players.”

Dickerson began his journalism career at ESPNChicago.com in 2001 and quickly gained a reputation for his reporting skills on the Bears beat. He also served as an analyst on Loyola basketball games, co-hosted a national radio show with local personality Jonathan Hood and contributed reports to ABC-7.

In a sports-crazed city where fighting for scoops can often create tension on a beat, Dickerson was a friend to every reporter he knew.

“It’s heartwarming to see him bring so many different people together,” Zaidman said. “That’s his gift. I used to joke with him and call him ‘The Ambassador.’ Few people we know get along with everyone, but that was Jeff. How lucky were we to have a friend like him?

“He faced such miserable circumstances over the last 10 years of his life, but he never complained. It takes a special human being to be as positive, graceful and dignified as Jeff was throughout all of this.

“I keep searching for meaning in all of this. Bad things like this shouldn’t happen to good people like Jeff. If some of his goodness is infused in all of us going forward, then I know we are in a better place.”